On Being a Teacher

Please note: I share in this blog some of the raw-er moments of teaching in Tatitlek in order to express some of my thoughts about being an educator. I want to emphasize how wonderful the students and teachers of the Tatitlek School are and how privileged I was to work with all of them for two weeks. They are some of the best bunch of people that can exist in one place, and as Tchabo says, "When do we get to go back, Mom?!?!"

When people ask me what I do, and I hear the words "I travel to remote Alaskan villages and teach film workshops" come out of my mouth, I imagine that to some it might sound glamorous and intriguing. When my own memory of the nitty-gritty fades, I am left with stunning moments. Returning now from Tatitlek, I have many. Stumbling on a Russian New Year's Masquerade in which my students were unrecognizable except a tuft of hair or a familiar strut. They each caught their shadow, as instructed, to carry it out of the room intact after the dancing was over. Visiting the village grave yard with students 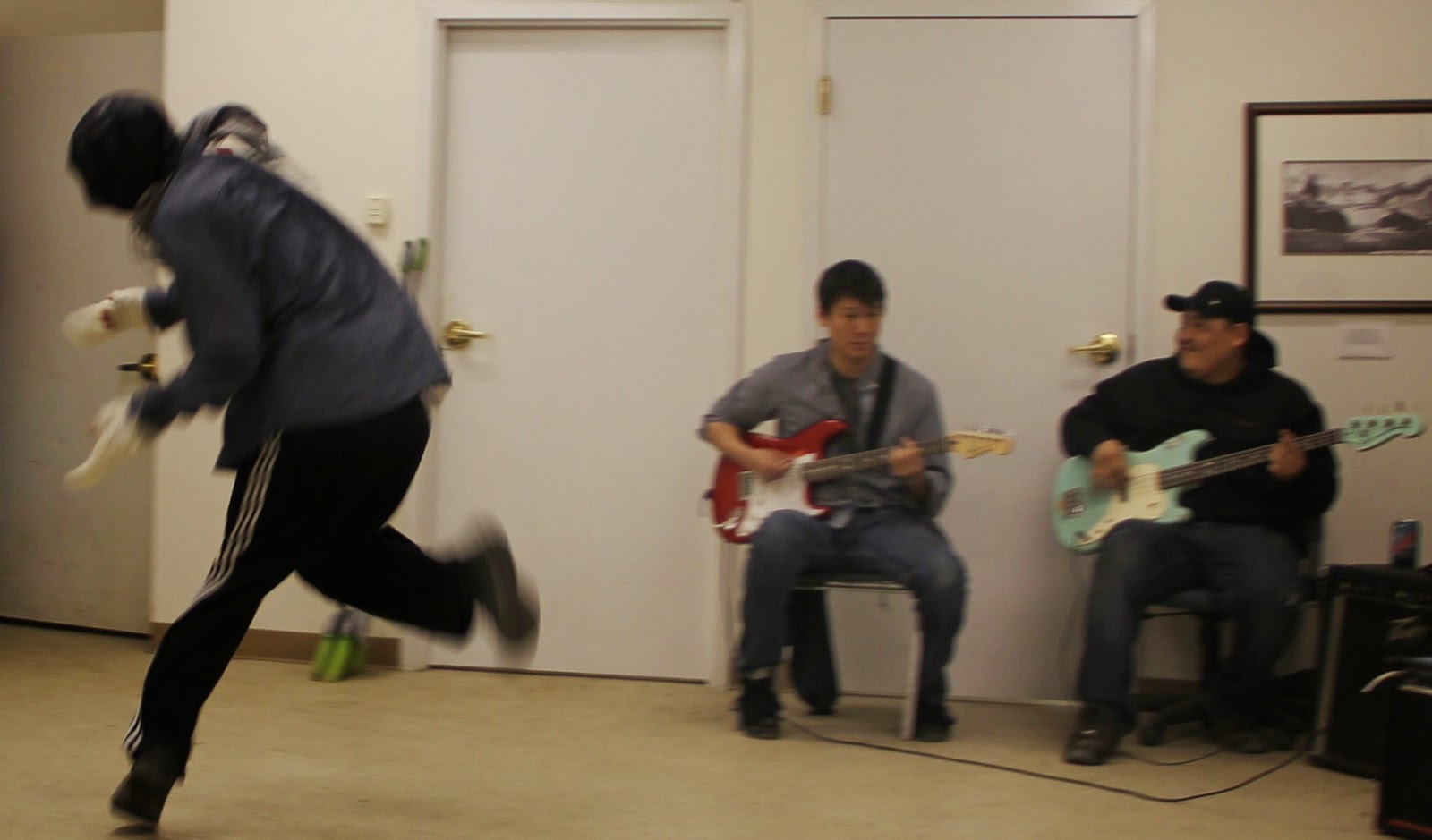 on a photo shoot while they spontaneously sang hymns. One young woman recruited her father for an interview, and he spoke more about the spill than many of the students had ever heard him speak in their entire time knowing him. His daughter was proud of the clean-up work he did, and he was proud of his daughter's film. "You were born to make movies" he told her after the community film screening, which he spent in the hallway to distance himself from the oversized version of himself projected on the gym wall. 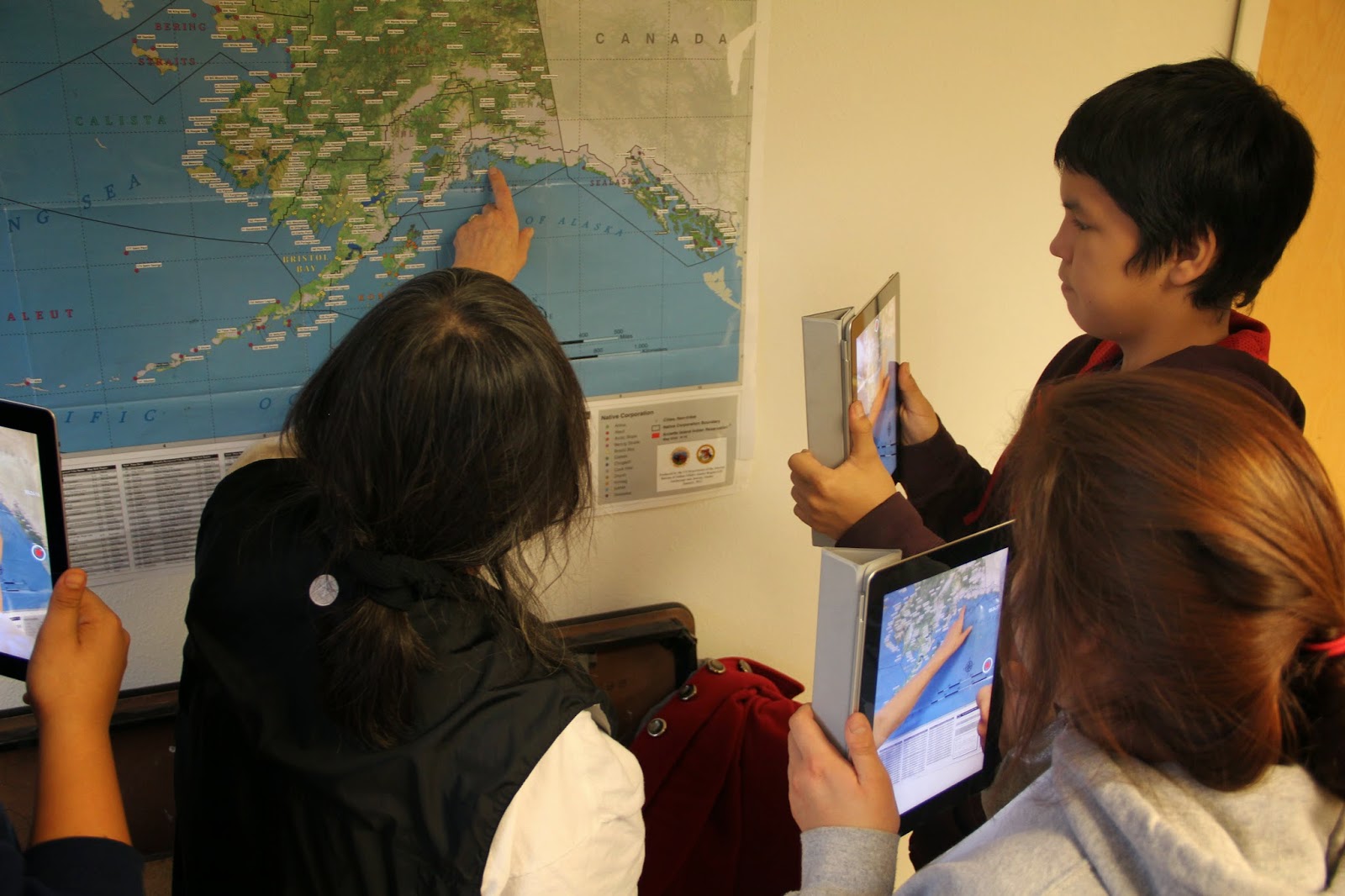 The meat of my work though is not film, or seeing new places, or making new friends. My job is to teach. And anyone who teaches knows that it is not a glamorous job. Rewarding, intense, challenging, punctuated by moments of self-doubt, giggles, boredom, plans that are reworked mid-way through the class… in Tatitlek, it occurred to me in a new way that I am an educator first and foremost. Film is my medium, but transformed students (and a transformed me) are the end goal.

In this photo Aunty Dean explains to the students what her father called Alingnaluni Atlartuq, or Bad Winds Bring Bad Times. Tatitlek sits right next to Bligh Reef, the source of the 1989 Exxon Valdez Oil Spill that blew down through the Prince William Sound, reaching Kodiak and beyond. This moment with Aunty Dean was one of the stunning moments that stays with me. And yet at this precise moment one of my students disappeared for 10 minutes. I knew I had to stay with the students, and yet I felt nervous about where she might be, and upset that she didn't tell me where she was going. Suddenly I wasn't witnessing the interview, or the way the students took turns asking spontaneous questions. This preoccupation was not the moment of a filmmaker, or an ethnographer, but of an educator. I do not work in spite of such moments, but with them. They are the fabric of teaching, and they happen not only on a daily but on an hourly basis.

I called the student to speak with me after class, and she stated a resounding no. I told her that it wasn't an option to talk about it, that I was nervous about where she was and that she needed to communicate. I don't CARE she explained to me, and thrust a DVD about the history of Tatitlek into my hand, showing me what she was retrieving while out of the room. You aren't respecting me, but more importantly you aren't respecting yourself right now I told her, and while I meant what I said sincerely, I realized how trite it might sound, so pre-packaged and presumptuous. We both returned to our day.

These are the kind of unglamorous moments that teaching can be composed of.

Later that evening I was chopping an onion in the kitchen for an Avgolemeno soup. Students ran laps in the gym. The same young woman kept peeking in on me as she made her rounds. I suddenly was stunned by an I was really cranky today. I'm sorry. She had ducked into the kitchen to apologize. For the next two weeks she was the student that kept the class moving and alive. She was the one who greeted me in the morning and told me she couldn't wait for class. She was the one who told me she was going to miss me and Tchabo so much when we left.

I love film. I love learning new cultures and communities. I love seeing all the different ways mountains meet water. I love the sensation of how hot a banya can get, how many bites it takes to chew muktuk, and how many cups of tea an Elder can drink at midday. But most of all I love working with young adults and supporting them to become who they are, to laugh with them when the mood in the room needs lifting, and to be together even when that's the last thing any of us wants.

Posted by See Stories at 5:40 PM No comments:

"I will tell you something about stories, (he said) They aren’t just entertainment. Don’t be fooled. They are all we have, you see, All we have to fight off illness and death." 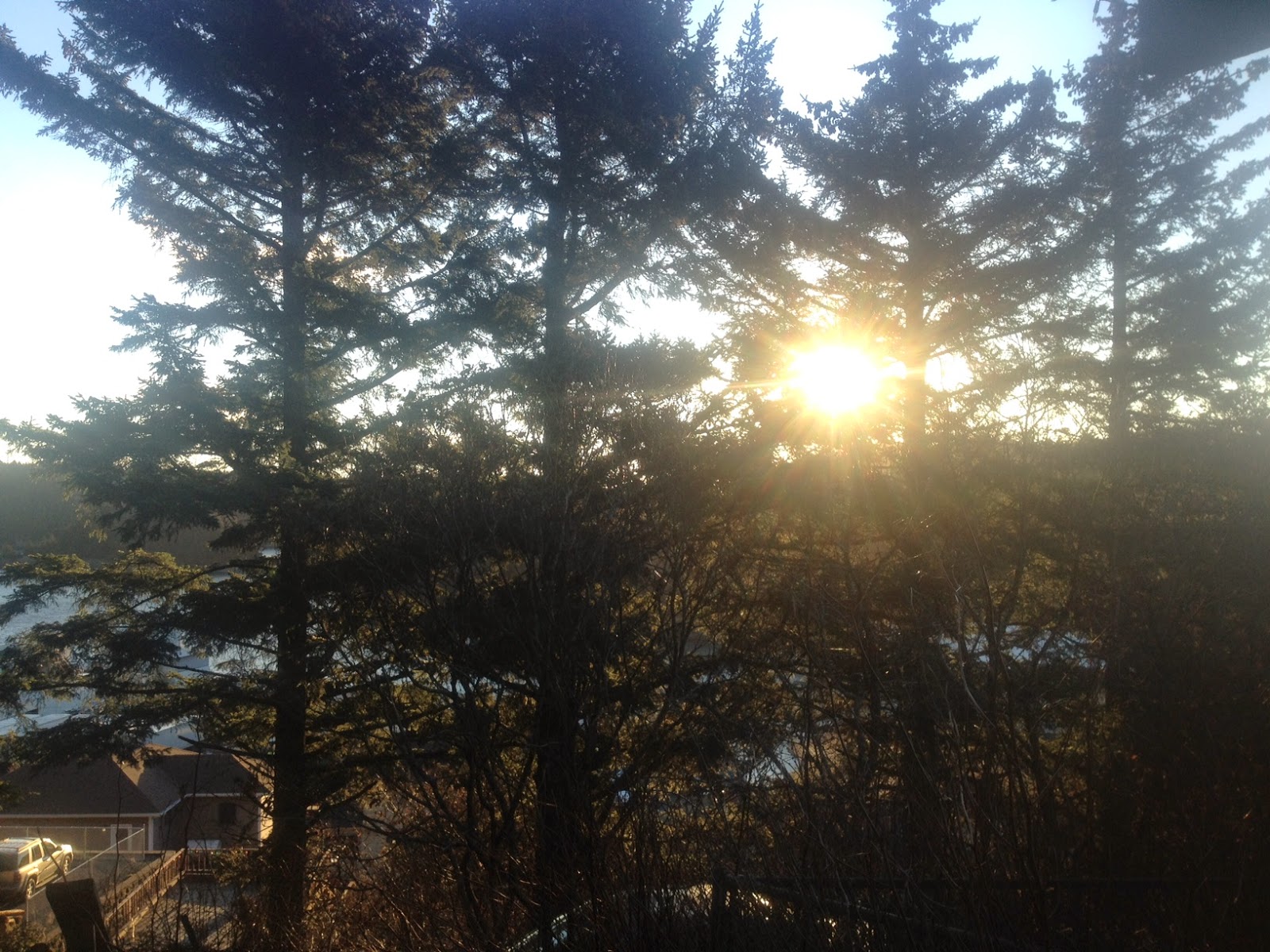 My work with See Stories gives me the greatest privilege of traveling to amazing places and listening to stories, and watching those stories work in the hearts and minds of young people. Like most people, during the holidays I took a break from my work, which allowed me time to reflect on the power of story. I recalled Silko's Ceremony that beautifully outlines how stories can make or break us. Here is the story I told myself on New Year's Eve and New Year's Day, accompanied by a beautiful sunrise...

This New Years Eve I stayed in. I watched Star Wars with my son (which embarrassingly I have never watched before),  and visited with a friend until it was time to toast the arrival of a fresh year. It occurred to me that New Year's Eve is one of the most inspiring and most pressure-filled holidays. There's the excitement of celebrating with those you love, of the sense that anything could happen with this new beginning. There is also the pressure to have a big grand time when perhaps that's not how you feel in the heart of winter, and sometimes reflection on the previous year that can come with mixed emotions. What are the stories we tell ourselves about our lives? The stories we tell ourselves about what our lives should be (in this coming year)?

The idea of a New Year, of a fresh start, of rebirth, is as old as rocks. As humans we need to shed skins, to release the old ways and embrace the new. The Christmas story is one of birth in the heart of winter. A mosaic shows how old broken fragments can transform into something beautiful. In Greek Mythology Persephone goes to the underworld and comes back up in cycles. Each day brings the freshness of new potential, each baby born the promise that humanity can evolve and deepen. This is a beautiful and essential part of human existence. These are the stories that nourish and shape us, day after day, year after year.

However, there's a cruel little trick we play on ourselves as we narrate our own story. Instead of gracefully releasing whatever has outgrown it's purpose, we shame ourselves for being the "wrong" way, and try to write a long list of all the things we want to be different about ourselves. New year's resolutions. I am not against new years resolutions by any means, but the idea that we start a fresh beginning thinking of all the ways we would like to be different can be dangerous. The obvious risk is that we don't make the changes and then have yet another thing to mentally beat ourselves up for.

My quiet New Year's Eve celebration made me realize that New Year's Eve is like any other night. The sun sets, and it rises. Life moves forward. What makes it special and different is the stories we tell ourselves around it, our regrets and hopes, of whatever skin we are ready or not ready to shed. This year I would rather make a list of all the stories I love and cherish about myself. Some of those stories may have outgrown their time, and I will let them go, but with love.

If I am to make one New Year's Resolution, it would be to embrace my own stories and to practice that in my work as I witness the stories of youth, elders, and communities. Instead of trying to fix myself or to help others through leading film workshops and doing community work, I would rather just sit with the stories and let them work their magic.